Can you spot a fake review?

Can you spot a fake review?

Adrian R. Camilleri, Senior Lecturer in Marketing, University of Technology Sydney recently conducted a study on the subject “How to spot a fake review: you’re probably worse at it than you realise” where he surveyed 1,400 Australians about their trust in online reviews and their confidence in telling genuine from fake.  He challenged respondents abilities to discern between the genuine and fake reviews and the results were very interesting.

The article affirms that trust is central to the importance of reviews in our decision-making and that we value complete stranger reviews of products and services online just as much as we do from family or friends.

According to the study, 73% of participants said that they trusted online reviews at least a moderate amount, 65% also said it was likely they had read a fake review in the past year.

The author argues that while 48% of respondents believed they were at least moderately good at spotting fake reviews, the younger the participant the more confident they were and while it is true younger people are likely to be more savvy online, he also argues an element of over-confidence exists.

The study states that the most important attribute people look out for (when determining whether a review is fake or not) is “extremity” – going over the top in one-sided praise or criticism.  The other attributes to look out for were:

How to spot a fake review 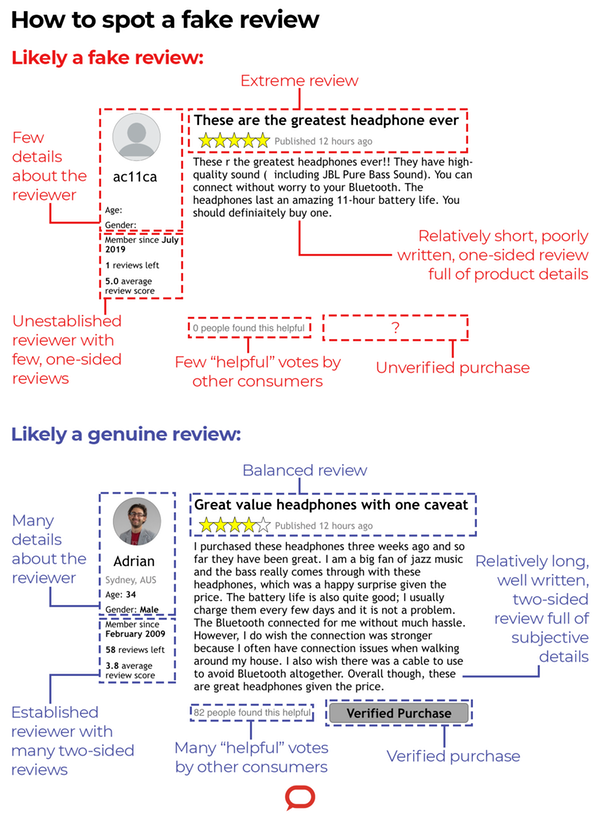 To learn how to address fake reviews check out our fake review enforcement page.